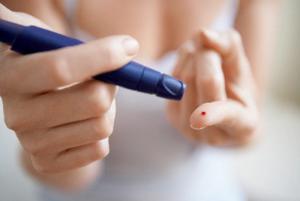 Diabetes mellitus is a common disorder of the endocrine system caused when the body is unable to produce or respond to the effects of insulin. Diabetes, as it is commonly shortened to, affects an estimated 387 million people worldwide and over 25 million people each year in the United States alone. Insulin is one of the main hormones regulating blood sugar levels and is used to convert glucose into energy for the body. The three types of diabetes, type 1, type 2, and gestational diabetes, all involve the bodies ability to produce insulin as well as its ability to properly regulate blood-sugar levels.

Type 1 diabetes, also known as juvenile diabetes, occurs because the insulin-producing beta cells of the pancreas are destroyed by the immune system. The onset of type 1 diabetes is sudden and mostly occurs in children under the age of 20. A person diagnosed with type 1 diabetes must take a daily insulin shot and make sure they take good care of their feet. Type 1 diabetes can be accompanied by unpredictable blood-sugar levels as well as diabetic ketoacidosis.

Type 2 diabetes is the most common type of diabetes and is due primarily to genetics and lifestyle factors. The body is able to produce insulin, but it may decrease over time as the pancreas either does not produce enough insulin or the body fails to recognize it. Type 2 diabetes is caused by obesity, not getting enough physical exercise, using tobacco, and having an unhealthy diet. If diagnosed with type 2 diabetes, it can be controlled through exercise and a healthy diet or through medication, and doctors may be able to detect high sugar levels before it turns into diabetes.

Symptoms of type 1 diabetes include increased thirst hunger and thirst, dry mouth, fatigue, and frequent urination. These symptoms can appear quickly and be debilitating. Type 2 diabetes can show the above symptoms or none at all. Diabetes cannot be cured but it can be controlled through exercise and a proper diet as well as maintaining cholesterol, triglyceride, and blood pressure levels at normal.

A doctor or physical therapist can help you control your diabetes as well as prescribe you a proper exercise routine to keep your diabetes under control.