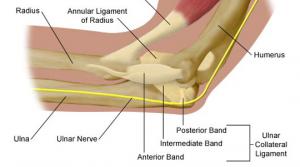 In 1974, a devastating elbow injury nearly tore Los Angeles Dodgers pitcher Thomas Edward John Jr.’s career from beneath his feet. He damaged his ulnar collateral ligament, or UCL, and feared his career may be over, or at least before he met team physician Dr. Frank Jobe. Dr. Jobe came up with an idea to borrow a tendon from John’s forearm and lace it through holes drilled in his ulna and humerus bones in order to provide support. The procedure’s intent was merely to relieve John’s pain and allow him to return to normal function—Jobe only gave the pitcher a 1 in 100 chance of returning to the game.

Luckily for Tommy John, the odds were in his favor. He returned to the Dodgers in 1976 after taking a full season off for rehabilitation. He continued to play professionally until 1989, and earned himself an impressive 164 wins.

The surgery Dr. Jobe performed now bears Tommy John’s name. It was revolutionary at its conception, but has become commonplace today. Complications are only found in 5-20% of cases and typically involves damage to ulnar nerve, which is often moved during surgery to prevent pain due to scar tissue pressing against it. Any complication is typically minor and very rarely is additional corrective surgery required.

Like Tommy John, most players undergoing this surgery are out of commission for at least a year due to the lengthy rehabilitation process. An immobilizing splint is worn for up to ten days after surgery, and is soon replaced with a range-of-motion brace that reminds the patient to mind their limits as they begin to regain motion in the injured joint.

Patients are carefully monitored after the procedure. They are advised to avoid rigorous activity that may irritate their elbow and are guided through exercises to strengthen not only their affected elbow, but also their shoulder and their entire arm. Patients are only allowed to begin tossing a ball 4 to 5 months after their operation, and are usually not allowed back on the field until 9 months have passed.

With the innovative surgery that Dr. Jobe brought to the game of baseball along with hard work from the athlete and their physical therapist many pitchers today are able to get back in the game performing at the top level they are accustomed to.