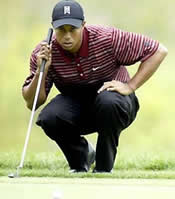 ALEXANDRIA, VA, February 27, 2009 — The world watched Wednesday as Tiger Woods made his much anticipated comeback to professional golf after undergoing ACL (anterior cruciate ligament) reconstructive surgery. According to the American Physical Therapy Association (APTA), rehabilitation with a Physical Therapist played a large role in Woods’ return to the golf stage.

“With all due respect and credit to Tiger’s surgeon for laying the foundation of his knee’s health, the rehabilitation that Woods has been undertaking since the day he emerged from surgery might be the most important factor in this next phase of his career,” said APTA spokesperson, Stephania Bell, PT, OCS, licensed Physical Therapist and ESPN.com’s injury analyst correspondent. “Returning to play after an ACL reconstruction can be daunting for any athlete, and some of the challenges an athlete faces are specific to his or her sport. But, since starting his rehabilitation for reconstructive knee surgery, Woods’ has been ahead of the game.”

All athletes depend on the ACL to help control knee stability. However, the Physical Therapist individualizes the rehabilitation program to the specific needs of the athlete. Rotation is a key component of golf and is addressed and incorporated into the athlete’s rehabilitation program. According to Bell, “Early in the rehab process, straight plane movements are emphasized, meaning the body moves in one direction – forward, backward or sideways.” These movements produce less force on the ACL during the critical, earlier stages of tissue healing. The simple movements make it easier for the body and the brain to adapt as the athlete relearns how to move properly.

Nevertheless there are basic, mechanical elements emphasized in a post ACL reconstructive rehabilitation program. “Core fitness is essential to train the muscles that support the pelvis and spine, in particular the abdominal and hip muscles, which are essential for the golfer’s frame,” Bell said. “Additionally, a stronger core serves to enhance the strength of the limbs; the legs and arms move easier and with less effort as an extension of a solid central base.”

APTA spokesperson Bud Ferrante Jr, PT, OCS, MTC, a licensed physical therapist who works with both professional and amateur golfers at his private Physical Therapy practice in Carmel, CA, says that full recovery from ACL surgery typically ranges from six to eight months when the ligament is completely healed. “Of course, every individual is different,” says Ferrante. “A typical golfer post ACL surgery could be back on the golf course as soon as six months following surgery — if the golfer works with a surgeon and Physical Therapist and follows the plan of care.”

Ferrante notes that the first week after surgery is mostly about controlling swelling, pain, and getting patients to start moving as soon as possible. “Individuals who undergo surgery similar to Tiger’s often use crutches for the first week following surgery to limit the weight-bearing on the knee and then progress to one crutch or a cane,” he said.

Physical Therapy starts immediately after surgery, several times a day at first, beginning with very gentle knee range of motion exercises, notes Ferrante. Depending on the extent of the swelling, a physical therapist will then work with patients who undergo surgery such as Woods’ on progressive range of motion exercises that focus on regaining any lost knee motion. Once the swelling has subsided, the physical therapist focuses on helping the patient strengthen the muscles around the knee, including the hamstrings, and quadriceps muscles.

“The most important thing following ACL surgery is that patients avoid any type of twisting motions of the knee and not overdo the activity in the first few weeks of healing. The knee takes about four to six weeks to heal. If swelling increases, this could impede recovery,” said Ferrante. Post-surgical ACL patients need to be careful going down stairs and to avoid certain exercises such as knee extensions.

APTA says that awareness of proper posture and the importance of fitness and flexibility are just as important for weekend golfers as they are for the pros. Golfers should have access to a physical therapist who can assess their physical abilities and provide individualized training programs that address musculoskeletal balance, body mechanics, strength, posturing and cardiovascular fitness.

Just as in professional tennis, there has been a significant increase in injuries among professional golfers, primarily because the game has changed so drastically and training has become so intense. According to APTA, it is now the norm, not the exception, for professional men and women golfers to work with Physical Therapists on improving these factors. But, it is vital that these programs be tailored to their individual skills.

Professional golfers make it look easy, but the golf swing is actually one of the most difficult and complicated movements in all of sports, requiring stability in some joints and flexibility in others. Having proper motion, strength, and function throughout the swing play a large role in preventing injuries. The payoff of a better swing is a more accurate ball strike, greater distance, and reduced stress on the muscles and joints.